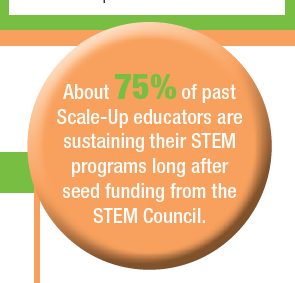 While the 2014-2015 implementation of STEM Scale-Up Programs winds down, evaluators are winding up to capture effects across a thousand educators and one-hundred thousand youth.

Between the three state university evaluation centers, each takes on one portion of the three-part assessment that captures the STEM Council priorities of raising interest, raising awareness and raising achievement in STEM. The first task—the teacher/leader survey—focuses on how an educator implemented the Scale-Up program in a classroom or informal setting, increasing the awareness of STEM. The other two tasks focus on students, using Iowa Testing Assessment scores in mathematics and science to gauge achievement and a student questionnaire to measure for increased interest in STEM education or careers.

The evaluators ask that educators complete all three tasks once the Scale-Up program has ended. However, some educators use the programs all year long, so the team sees more tasks completed in between March and May. Then, within four to six weeks after the assessment tasks are due, a small team of staff from each university devotes a portion of their time to work on the report alongside a handful of student research assistants that help collect, enter, track and analyze the data for the annual Iowa STEM Monitoring report.

But, every year is different. Heiden said the biggest challenge to overcome is annually reviewing and monitoring the three tasks to ensure they still capture the variety of Scale-Up programming added to the menu each year and the relevant data needed despite the different offerings and methods of implementation per program.

“On a personal level, it’s always fun to hear the educators’ success stories as I’m in the depths of crunching numbers,” Heiden said. “Even after answering questions from an educator that has some sort of technical difficulty with one of the tasks or they’re wondering how to proceed, almost all of them end the e-mail or telephone call with gratefulness for the Scale-Up program and how they and their students have enjoyed the program.”